New Japanese imports in our kennel! 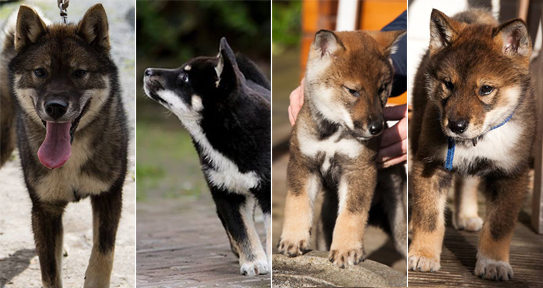 Chiyo is the oldest (8 months), she’s a very friendly female with a nice thick coat. She’s from one of the last breedings of the famous breeder Mr. Yano, before he passed away. Chiyo already did a NIPPO show in Japan at the age of 6 months and she became best in her class.

Haru is a black and tan female from very interesting bloodlines. We believe that the black and tan color needs more promotion. Until now, the black and tan has been seen as a unwanted color, which is a misunderstanding. This color is not yet recognized by FCI, but it is recognized in Japan by the Japanese Kennel Club. It’s about time for FCI to fix the standard for the Shikoku 😉 Haru’s markings are seen as correct markings and coloration, a good example of how a black and tan Shikoku should be.

Ryuu and Tetsu share the same father, but both have totally different mothers. Their father is Gakushun, who became best in show in Japan in 2012 (national NIPPO show). They have been selected for breeding by us and the breeder together.

We have seen many beautiful Shikokus in Japan, have a look below in our photo album: